Born just outside Warrington in the north-west of England, Mister Connor has spent much of his life moving house.

From the north-west, he schlepped his way to East Anglia, then to County Wicklow in Eire, thence to Cumbria, before settling for an idyllic teenage on the coast of Northumberland, an area for which he still retains an intense affection. After performing adequately at A Level, he hauled his way to Dundee, city of the three Js, where he completed an English/History (Joint Hons.) degree.

After three years working for a reputable dot-com business, he changed t

ack completely and taught English in Barcelona for a short spell, before returning to Scotland. Five years in Glasgow saw him complete a post-grad. degree in Information and Library Studies and his P.G.D.E., qualifying him as an English teacher. (In the middle of these he worked in Glasgow’s social work department for two years.) 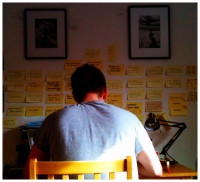 hing position meant a move north to Banff in Aberdeenshire. After three productive years spikking the Doric, he spent four years having a whale of a time teaching in Golspie in the Highlands. In 2014, he moved to Monifieth High, his current school.

Mister Connor has supported Manchester City F.C. since before they were any good. He plays the guitar competently. He has self-published one novel (which is dreadful) and a collection of aphorisms (which isn’t dreadful).