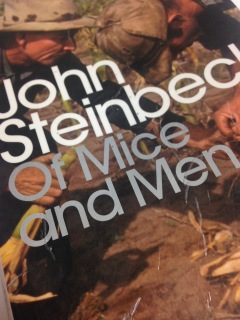 TASK SIXTEEN
“I tell you I ain’t used to livin’ like this. I coulda made somethin’ of myself.” She said darkly, “Maybe I will yet.” And then her words tumbled out in a passion of communication, as though she hurried before her listener could be taken away. “I lived right in Salinas,” she said. “Come there when I was a kid. Well, a show come through, an’ I met one of the actors. He says I could go with that show. But my ol’ lady wouldn’ let me. She says because I was on’y fifteen. But the guy says I coulda. If I’d went, I wouldn’t be livin’ like this, you bet.”
The reader is left to ponder how much truth is in Curley’s wife’s story. It seems possible that this is a story of another man taking advantage of her. For all of her fierceness, we must remember that she is a young and naïve girl. On the other hand, the story is another example of a dream destroyed – just like the dreams of all the other characters.
“Then—it’s all off?” Candy asked sulkily. George didn’t answer his question. George said, “I’ll work my month an’ I’ll take my fifty bucks an’ I’ll stay all night in some lousy cat house. Or I’ll set in some poolroom til ever’body goes home. An’ then I’ll come back an’ work another month an’ I’ll have fifty bucks more.”
Notice Candy’s main concern is whether the dream will survive, not Lennie’s survival. This reveals his intense fear for the future. George resorts to telling the clichéd story of one of the ranch hands, showing that his dream is now finished.
Slim nodded. “We might,” he said. “If we could keep Curley in, we might, But Curley’s gonna want to shoot ‘im. Curley’s still mad about his hand. An’ s’pose they lock him up an’ strap him down and put him in a cage. That ain’t no good, George.”
Slim, consistent with his character, is wise and accurate in his summary of the situation. He is telling George what he already knows, that Lennie’s actions have made his death necessary – George from this point on has no other option. If he wants to do the right thing for Lennie, he must kill him.
And when they were gone, Candy squatted down in the hay and watched the face of Curley’s wife. “Poor bastard,” he said softly.
This is a somewhat ambiguous sentence. It seems most likely that he understands that Lennie must now die, but there is a possibility that, looking at Curley’s wife, he understands that she has also suffered.
George said softly, “—I think I knowed from the very first. I think I knowed we’d never do her. He usta like to hear about it so much I got to thinking maybe we would.”
George seems to be accepting the pessimistic world view – that in the world of “Of Mice and Men”, dreams are impossible, and the poor will not overcome their circumstances. He explains that by telling Lennie the story over and over, he came to persuade himself that the ranch might actually be bought, but this feeling was misplaced.